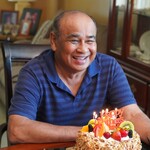 Our beloved Anthony (Moeurn) Uk passed away on February 8, 2021 at the age of 71. He will forever be remembered as having a gentle soul and huge personality. He was well known within the Cambodian community, not only for his infectious personality but also for his charitable endeavors. There were few people who did not know his name.

Anthony (Moeurn) was born on July 10, 1949 in Prey Veng Province, Cambodia to Uk, Muth (Father) and Chea, Lay (Mother). His family lived in the countryside and despite working hard, had very little means. As the oldest of three siblings, despite the many challenges, he was determined to receive an education. When he was 10 years old, he would pedal 50 km/31 miles on his bicycle down a dirt road to school. He later attended the University of Phnom Penh. While his more privileged university friends were able to focus solely on school, Anthony (Moeurn) worked as a tuk tuk driver in the evening in order to pay for his tuition. After university, he spent two years training as a schoolteacher at the Faculty of Pedagogy.

In 1972, he married Sophy Prak and they had a daughter, Mealadey (Srey Naut). Anthony (Moeurn) became a dedicated husband and father, commuting to the city everyday where he worked as a schoolteacher in order to support his new family.

During the Khmer Rouge Pol Pot Regime, Anthony (Moeurn) was forced to flee to a Thailand refugee camp in December 1975. Due to the risks associated with the trek, his wife, Sophy, and young daughter, Mealadey, remained in Cambodia. In June 1976, he moved to Houston, Texas under the U.S. Refugee Program where he would settle down and call home. He quickly adapted to the American lifestyle and became an avid sports fan. He rarely missed a game if a Houston sports team was involved, especially the Rockets or Texans.

In 1978, he met Tina (Heav) Uk who he later married and initially had two children with - Evelyn (Alean) and Edward Paul. Tina provided Anthony (Moeurn) with strength and support, which included encouraging him to search for his family. When he found out both his first wife, Sophy and daughter Mealadey were still alive, he immediately worked on sponsoring them to America, where they finally reunited in 1987. Ultimately, he had three more children - Elizabeth, Erick, and Christina.

Anthony (Moeurn) worked at Schlumberger for over 20 years at their Gulf Freeway and Rosharon locations. He retired as a Mechanical Development Technician III in March 2004.

Anthony (Moeurn) loved documenting his family’s lives through many photos and videos. It was important to him because it was how he shared his new life in America with family. He always added commentary to his videos in Khmer and English so that his Cambodian relatives and children alike could look back and appreciate the memories. His parents proudly displayed a collage of the pictures he sent over the years in their home. Social media made it even easier for him to connect with loved ones. Facebook specifically became such a big part of how he connected with his friends and family from all over the world.

Anthony (Moeurn) was a devout Buddhist who actively served the Cambodian Buddhist Temple in Houston. The teachings of Buddhism were instilled in him from a young age, attending the temple with his parents ritually and being taught directly by the monks. He always emphasized the importance of showing compassion to all living things and to “practice doing the good deeds” to his children. After his retirement, Anthony (Moeurn) wrote two Buddhist books in Khmer and distributed them to temples in Cambodia for free so that everyone could have access to the teachings of Buddha, regardless of their financial situation.

Anthony (Moeurn)’s family and friends will miss his infectious laughter and smile. He will be remembered as a kind hearted man who valued his friendships and loved all of his children and their accomplishments.

Anthony (Moeurn) is predeceased by his parents Uk, Muth and Chea, Lay, and his granddogs Maxie and Yuki. He is survived by his wife, Tina (Heav) Uk, their children, Evelyn (Alean) Uk; Edward Paul Uk; Elizabeth Jane Uk, her husband Elliot Lonie; his first wife Sophy Prak, their children Mealadey (Srey Naut) Souvannarath, her husband, Somsack Souvannarath; Erick Prak, his wife Pisey Prak, and Christina Prak; his siblings, Uk, Ly and Uk, Mean, his granddog Nala and numerous cousins, nieces, nephews and in-laws who all brought him a tremendous source of joy.

A visitation will be held at Winford Funeral Homes, 8514 Tybor Dr, Houston, TX 77074 on Saturday, February 20th from 3:00 to 7:00 pm, the funeral service and cremation will be the following day on Sunday, February 21st and will begin at 2:00 pm. Due to the pandemic, we ask that you please practice social distancing and remain home if you are unwell. Please note that face masks and temperature checks will be required.

The funeral home will offer a live-stream of the service online: