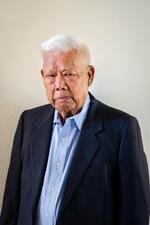 Canh T. Tran, 90, of Seabrook, TX, peacefully passed away on January 17. He was surrounded by his wife of 71 years, 9 children, 6 sons in laws, 2 daughters in laws, 22 grandchildren, and 2 great grandchildren. He passed away after a long battle with renal failure and Myelodysplastic syndrome (blood & bone marrow cancer).
Canh T. Tran was born on April 04, 1930 to his parents in a poor rural area in China. He never received a formal education and spent his entire childhood working in the fields to help his parents. At the age of 17, he was sold as a slave to find work in Saigon, Vietnam. Leaving behind his entire family in China, he was sent to a foreign country without knowing anyone or the language.
He spent most of teenage years, working in servitude and sending whatever he made back home to his parents in China. After several grueling and hard years, he was able to pay off his servitude.
In 1950, he met Tien T. Quach in Vietnam. Canh T. Tran and Tien T. Quach went on to have 9 children. After several years of building a successful coffee business in Vietnam, he lost everything to the Vietnam War. To find a safer and better opportunity for his family; he found a safe passage to the United States for himself, his wife, and all his children.
In 1979, Canh T. Tran and his family arrived on the coast of Texas. Again, Canh T. Tran found himself in a brand-new country without knowing anyone or the language. Determined to make a living and care for his family, Canh T. Tran would go shrimping early in the mornings and then later in the day selling his catch on the streets in downtown Houston. Even after arriving in the United States, he continued to send money home to his parents and to the remaining family members in China.
Eventually, in 1980 Canh Tran moved his family to Seabrook, Texas and made it their home for the next 42 years. In the same year, he was able to buy a seafood market in Seabrook, which began what is his greatest legacy, Rose’s Seafood, Inc.
Canh T. Tran retired after 35 years from the family business. While retired, he would still be found drinking his hot tea and eating his snacks in the corner of Rose’s Seafood and greeting all the customers who came into the store. If Canh Tran was not inside Rose’s Seafood, you would always find him outside behind the store gardening and planting the most incredible vegetables and fruits. Or he would he happily babysitting his youngest granddaughter at Rose’s Seafood.
Canh Tran also built a school in his hometown in China. He wanted to ensure that the children there would have the opportunity to receive a free education and be able to have a better opportunity for themselves. Every year, Canh Tran would still also donate to several organizations and causes that were close to his heart.
Canh T. Tran’s life is the epitome of legends. From a poor enslaved immigrant, without any education; he made the best of his life. The love he had for his wife, was so great that he lived and breathed his last breath for as long as he could for her. He taught his children the meaning of resilience, gratitude, and most of all the immeasurable love of a parent.
He will forever be missed but never forgotten and always loved.