To share your memory on the wall of Dr. Chengde Wu 吴诚德医师, sign in using one of the following options:

Provide comfort for the family by sending flowers or planting a tree in memory of Dr. Chengde Wu 吴诚德医师

Provide comfort for the family by sending flowers or planting a tree in memory of Dr. Chengde Wu 吴诚德医师

Receive notifications about information and event scheduling for Dr. Chengde

We encourage you to share your most beloved memories of Dr. Chengde here, so that the family and other loved ones can always see it. You can upload cherished photographs, or share your favorite stories, and can even comment on those shared by others.

Posted Aug 26, 2020 at 08:04pm
Deepest condolences to all Dr. Wu's family. He had a tremendous influence on my life though I was just an occasional patient. He was the most intelligent person I ever met.
Comment Share
Share via:
MH

Posted Aug 18, 2020 at 07:36pm
Xiaoping, my deepest sympathy on the loss of your Father. Dr. Wu was a kind and gentle soul who shared his wisdom and knowledge freely and I enjoyed my visits with him. He will be sorely missed. Be gentle with yourself. MJ Harrison
Comment Share
Share via: 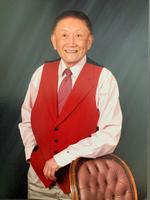