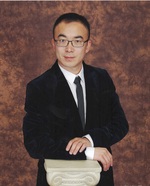 Guangzhi (George) Han passed away on Feb. 22nd, 2021 in MD Anderson Cancer Center Houston, Texas due to Lung Cancer. He was born in Anda, Heilongjiang, China on Dec. 24th, 1982 to his parents Shujiang Han and Zhihui Sun. Guangzhi grew up in Qinhuangdao, Hebei, and graduated from Qinhuangdao No.1 high school. After high school, he finished his Bachelor's Degree in electrical engineering from the Hebei University of Technology. Like many other international students, Guangzhi came to the US to seek his American Dream in 2006 and finished his Master of Science degree in Petroleum Engineering from the University of Wyoming in 2008. After finish all his education, Guangzhi started his career in the oil and gas industry and became a measurement-while-drilling field engineer, later on, he served as a directional driller in Baker Hughes. After 11 years of field works, he embraced the new technologies and served in many related positions such as drilling performance analyst, product owner performance analyst, and new generation drilling application engineer. His colleagues were all missing him and gave their highest recognitions. One of his colleagues Detlef Hahn said, “George was such a great person, so smart, so intelligent, always helpful and friendly. I was really blessed having the chance working with George together.”
Guangzhi Han and Ding Sun married in 2010 and moved to the greater Houston area in 2014 after he finished his service in the field. Very unfortunately, Guangzhi was diagnosed with stage IV lung cancer in 2016, but he also received the best gift in his life, his lovely daughter, Rachel Han in the same year. For his family and friends, he fought against the pain and fear bravely. Guangzhi was a man of perseverance. He maintained exercise every day and playing soccer, which is his favorite hobby. He joined the Katy soccer team and made many life-time friends. Cooking is another Guangzhi’s hobby and it is his way to express his care and love to his family.
Guangzhi passed away at age 38 after a meaningful life of adventure, success, and was an inspiration to others. His story about fighting cancer encouraged and moved hundreds of people. He is survived by his wife, Ding Sun, the love of his life; his daughter Rachel Han; and his parents Shujiang Han, and Zhihui Sun. Guangzhi was loved by many, many people and will be truly missed.
A memorial service will be held at 10:00 a.m. on Sunday, March 14, 2021, at Winford Funerals, 8514 Tybor Dr, Houston, TX 77074.