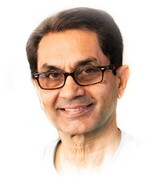 Prakashchandra Kantilal Patel, age 66, passed peacefully in the arms of his family on Sunday, January 17, 2021 at 12:25am in Houston, Texas after a courageous battle with lung cancer.

Prakash was born on September 28, 1954 in Surat, India to Bhikiben and Kantilal Patel. Prakash graduated PT Science College with a degree in Chemistry in Surat. In 1979, he immigrated to Los Angeles, California with his wife, Bharatiben Patel, where he fulfilled the American dream as a hospitality business owner. Prakash devoted his life to his family. He enjoyed travel, fitness and a passion for food.