To share your memory on the wall of Son Dao, sign in using one of the following options:

An obituary is not available at this time for Son Bach Dao. We welcome you to provide your thoughts and memories on our Tribute Wall. To send flowers to the family or plant a tree in memory of Son Bach Dao, please visit our Heartfelt Sympathies Store.

Receive notifications about information and event scheduling for Son

We encourage you to share your most beloved memories of Son here, so that the family and other loved ones can always see it. You can upload cherished photographs, or share your favorite stories, and can even comment on those shared by others.

Posted Jul 13, 2020 at 07:25pm
I worked with Sony for over 12 years. He was an incredibly gifted engineer and hard worker. I can't tell you how many projects meetings I would sit in where we would discuss it seemed like a hundred things we needed to do, and never saw Sony write a single thing down, and yet he would never miss a thing. Meanwhile I'd have a page full of notes. He was just always willing to help out in any way, and was very patient with me and my thousand questions. He worked right up until the end, because that's the type of guy he was. I'll miss him and I hope his family knows he was cherished at work.

Posted Jul 11, 2020 at 11:22am
Sony and I have work in adjacent offices for the last 17 years. He is a dear friend. We would always turn to each other for help and advice. He was a book of knowledge. He loved to tell me about his boys. He was so proud of you. I am so sorry for your lose. He will be greatly missed. Kim Sullivan
Comment Share
Share via:
GD

Posted Jul 10, 2020 at 12:03pm
I recalled in the mid 80s, Sony and I were living together down in Missouri City, I think it was on a Saturday night, almost midnight, he got a call that there was an alarm on one of the refinery unit.
If the situation can not be handled within an hour, started evacuation because that refinery unit was going to blow. Back then, the only main road to the plant was to take HillCroft (which is Fort bend Parkway now) up to Main (US-90) and then South loop east to Pasadena. It takes about 40-50 mins to get to the Plant and Sony decided to come in and was able to shut down that refinery unit.
I never heard him bragging or mentioning that incident again. That's how dedicated and humble Sony is.

Posted Jul 09, 2020 at 10:14am
I am the next younger sibling of Sony. We are probably closest among brothers, probably since both of us have Electrical Engineering degree. We talked on same frequency spectrum, same baud rate. If you recall, Sony came abroad to the States in 1975, the year of Vietnam war ended in April. Sony was accepted to the university of Houston early in the year. But because of the turmoils by the war, all paper works from government to get a student visa weren't done. Our parents went to a fortune teller and she told that there was celestial fences above and nets below, he could not go anywhere. But by some miracle, his papers went through and he took a flight to the States 2 weeks before the fall of Saigon in April.
My parents went back to the fortune teller and she told she missed a small detail. His birth sign was a Monkey , but not any ordinary monkey, it's Monkey King. With his golden staff, he could break through any hindrances on his path.
I'm sure Sony has "broken through" many challenges in his lives and during his career.

Came to the States in April 1975 and 2 weeks later lost communication with family for a year or 2 due to the fall of Saigon to North Vietnamese Communist. He was elected President of the Vietnamese Student Association at University of Houston since all Vietnamese students lost contacts to their family. They were like family to each other and seek comfort among them during that period. He finished his Electrical Engineering degree with a perfect 4.0 GPA. All professor recognized my face immediately when I entered UofH a few years later, such a high bar Sony has set.
He is always nice, humble, try to resolve conflicts among siblings. We sure will miss him.

Posted Jul 08, 2020 at 02:43pm
I worked as a summer engineer at the refinery in 1977 and hired in as a regular employee in December 1978. I spent most of my 40 years with the company at the refinery and knew Sony well. He was someone that could be depended on and someone that helped solve problems whether simple or complicated. Here’s one story about Sony.
In 1983 we convinced the refinery to buy a PC for 10,000$, it was the first ever bought by the refinery or by ARCO. We wanted to use the PC to do a series of calculations on the flow of purchased and sold gases and liquid products. We were able to program the PC to do the calculations but we also wanted to use graphics board and stylus so that personnel could trace the ink lines on the measurement chart to enter the Temperature, Pressure, and Flow information from circular charts rather than taking 4 readings per hour for each and averaging the readings before doing the flow calculations. I wasn’t smart enough to figure it out, and we couldn’t find anyone else to write the program to take the readings…..then we contacted Sony. Sony figured it out quickly, wrote a program so that the ink lines on the charts could be traced with the stylus and the data turned into ‘flow volumes’ and the PC was in business. Quickly one person with the PC in a couple of hours was doing the work of 5 people working full time!!!
This is just one example of how Sony solved problems that no one else could. It didn’t matter what the problem was, if it was hard, you wanted Sony to help you. He always had a positive attitude and convinced those he was working with that the problem would be solved.
Beyond his professional abilities, Sony was friendly, courteous, and helpful. He brought a smile to everything he did. Though our relationship was only at work, I feel that Sony was a friend, someone that I was fortunate to have met, worked with, and shared some happy times with over almost 40 years. 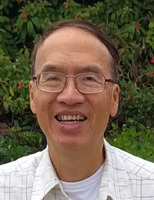